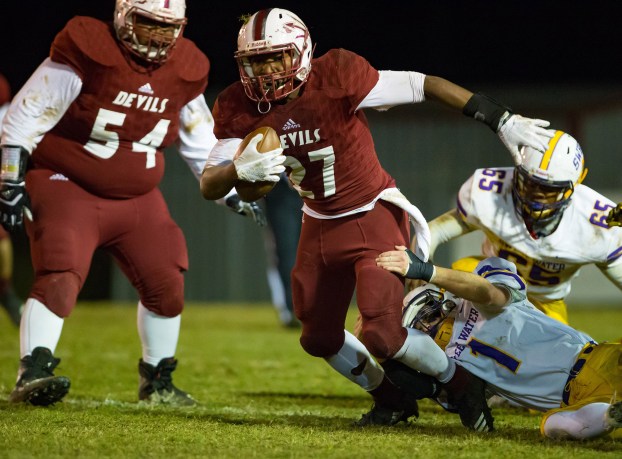 How sweet it is: Maplesville takes down Sweet Water in 1st round

While the water may be sweet in Marengo County, a first-round playoff victory over the defending Class 1A state champion was even sweeter, as the Maplesville Red Devils took down the Sweet Water Bulldogs 35-12 on Nov. 9.

The Red Devils never trailed in the contest en route to the win.

“When you play a team like Sweet Water that is the defending state champ, when you get them in the first round it’s tough,” said Maplesville head coach Brent Hubbert. “We both knew it would be a tough, physical ballgame. I was proud of our guys. They came out and executed on offense, and the defense played outstanding.”

Jackson Abbott broke a 55-yard touchdown run on a keeper late in the opening quarter to give Maplesville a 7-0 lead at the end of the first.

Sweet Water ended a long drive with a 2-yard touchdown plunge but missed the point after to narrow the gap to 7-6 with 7:21 left in the second quarter.

Less than a minute later Abbott found Ryan Morrow wide open on the left sideline. Morrow pulled in the pass and stiff-armed a Bulldog defender all the way to the ground before running into the end zone for a 63-yard score.

The Bulldogs wasted no time in responding by returning the ensuing kickoff 80 yards for a score. However, Sweet Water once again missed the conversion, leaving Maplesville ahead 14-12.

With 4:16 left to play before halftime, Christin Brown drug two defenders into the end zone with him on a power run from 21 yards out.

The score gave the Red Devils a 21-12 advantage at the break.

The Maplesville defense forced a turnover on downs on its own 38-yard line at the 2:58 mark of the third quarter.

A 43-yard pass from Abbott to Timothy Bradley set up a 7-yard touchdown run by Jakavian Mckenzie that gave the Red Devils a 28-12 lead by the end of the third quarter.

Brown recovered a Sweet Water fumble at the Bulldogs’ 42-yard line, and Brown capped off the ensuing drive for Maplesville with a short touchdown plunge to set the final score of the contest.

The victory puts Maplesville at 10-1 on the season. While talking to his players after the game, Hubbert referred to it as a “decade of dimes,” because the Red Devils have won at least 10 games over each of the last 10 seasons.

MHS will travel to play Georgiana in the second round on Nov. 16.

“Our guys, fortunately, are used to being in the playoffs,” Hubbert said. “They know we have to come back in (next week) to work. They know what we have to do.”

JHS unable to finish off win against Marbury