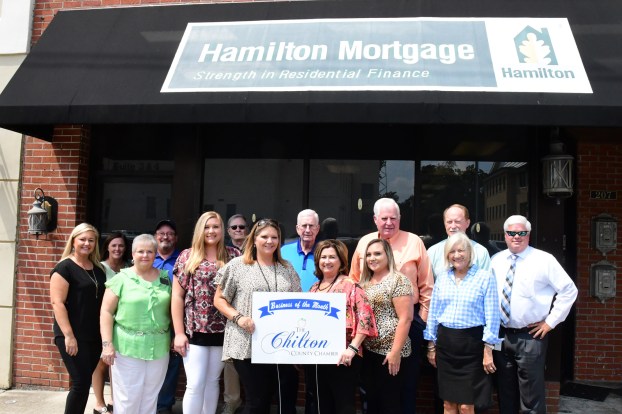 Hamilton Mortgage in Clanton was honored as the Chilton County Chamber of Commerce business of the month for August. (J.R. TIDWELL/ADVERTISER)

Hamilton Mortgage in Clanton was honored as the Chilton County Chamber of Commerce business of the month for August.

Representatives from the Chamber visited the Hamilton Mortgage office and congratulated staff during a small ceremony Aug. 8.

“We were very excited about it, and very proud,” Branch Manager Glenda Popwell said. “As far as the Chamber, they have done great. I love (Executive Director) Francine (Wasden). It’s just an honor to be named business of the month.”

Popwell said Hamilton Mortgage has been in business in Clanton for the last three and a half years. Three members of the group worked together previously at a similar business that decided to close.

“We found that out on a Friday, and that Monday I had two people from Hamilton Mortgage come in my office,” she said. “We had three offers, and we decided to go with Hamilton because they were more of a family-oriented company and not a large corporation. The home office is in Birmingham.”

Popwell said Hamilton Mortgage originate mortgages, does all the paperwork, processing them and takes the closing “from start to finish.”

“We have a lot of referrals, repeat customers and referrals from some local realtors,” she said.

Hamilton Mortgage is located at 207 Sixth St. N next to the Chilton County Courthouse.