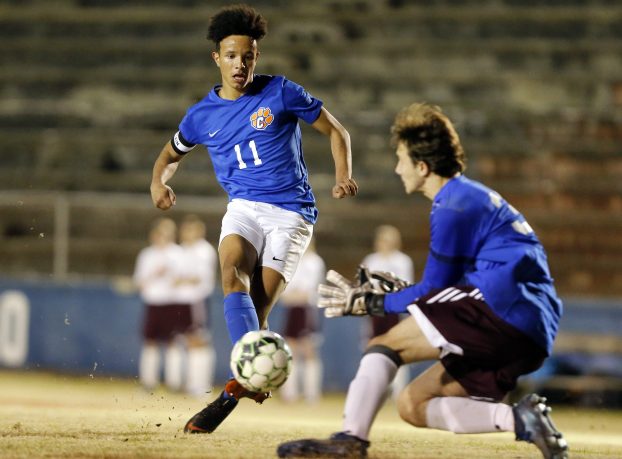 The soccer season may have been canceled, but Chilton County High School senior Tyrell Price finished his high school career on a high note by being named a 2020 first team All-State soccer selection.

“I couldn’t believe that I made it,” Price said. “It was something I had been working on since last year. It’s a real feeling of accomplishment.”

Price was known as a gifted scorer and had tallied 24 goals in six games, as he had his sights set on challenging the state’s single-season record for goals prior to the cancellation of the 2020 season.

“I have played with most of the kids on the list, and I would definitely say that I belong there,” Price said.

According to CCHS head coach Brandon Gurganus, Price has a natural ability to play the game of soccer.

“He has speed, which makes him faster than anyone else he’s on the field with,” Gurganus said.

However, it is the combination of Price’s physical tools and relentless work ethic that makes him such a dominant player.

“You could not practice enough to satisfy him,” Gurganus said. “He was the first at practice and usually the last to leave.”

Price credited his parents for instilling in him the understanding that success comes from the amount of work that is put into something.

Despite being the star player on the team, Gurganus appreciated Price’s willingness to take the time to help his teammates any way he could.

“When he plays within himself and doesn’t try to do too much, he’s probably the best soccer player in the state,” Gurganus said.

Helping push him to be among the best was a list of goals that Price and his father sat down and wrote when they first came to Clanton from Germany.

At the top of the list was getting a scholarship offer from UAB and being a first team All-State selection. Both of those have now been achieved.

“I work for everything I want in my life,” Price said. “I love soccer and I’m doing everything I can to make it happen.”

Price is the first All-State selection for the young CCHS soccer program, which has only been in existence for two years.

Gurganus hopes that Price’s accolades will create more interest for the program.

“I’ve had a lot of students text me about the program,” Price said. “We’ve built something up.”

“For me, this is just the next step,” Price said.

He thanked his parents and Julian Pohlenz, who was his best friend growing up in Germany, for their continued support of his soccer career.

According to Price, Pohlenz’s family helped drive him to a lot of practices over the years.

“Without him, I wouldn’t be where I am now,” Price said.