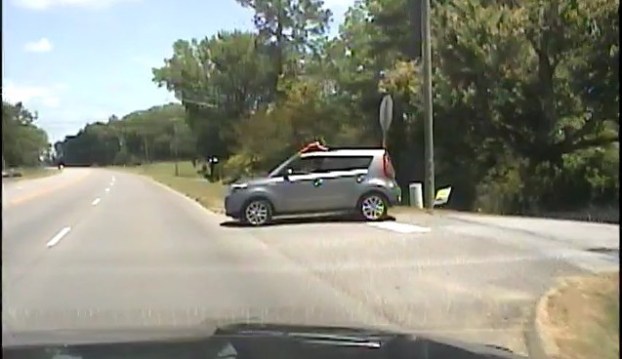 This vehicle is thought to have been in the vicinity of the assault. (CPD)

The Clanton Police Department has arrested two suspects allegedly involved in a break in on May 21 around 11:30 a.m.

“Warrants are being obtained for both subjects, and no bond has been set at this time,” Cpt. David Clackley of CPD said.

The Chilton County Sheriff’s Office also responded to the scene and worked together with CPD and K9 Max to track the suspects.

“Approximately 100 yards from the house, on the side of the street, the face masks and gloves were located by the tracking team,” Clackley said. “The track continued toward Lay Dam Road and perimeter officers covered the area to prevent the suspects from exiting the area. After a couple of minutes, CCSO deputy William Scarbrough spotted the subjects in a yard near Lay Dam Road and detained them.”

The handgun was found by the K9 tracking team “in a row of ferns concealed from view approximately 100 yards from the location where the subjects were detained.”

“This incident is just one example of the benefit of CPD and CCSO teamwork and combining of resources during major crimes,” Clackley said. “Recently, we have had a series of theft related offenses and we continue to work together to keep our neighborhoods safe. Several arrests have been made due to the hard work of our officers and deputies.”

Neighbors told police that a “suspicious vehicle” was in the area with a Pizza Hut logo setting on its roof.

“The driver of the vehicle may be a witness in the case or may have been providing transportation for the offense,” Clackley said. “At this time it is unknown if the driver is a suspect or witness. If you have any information about the vehicle, please contact Detective Ray or CPD. We have checked with area Pizza Hut locations, and they are unaware of this vehicle.”