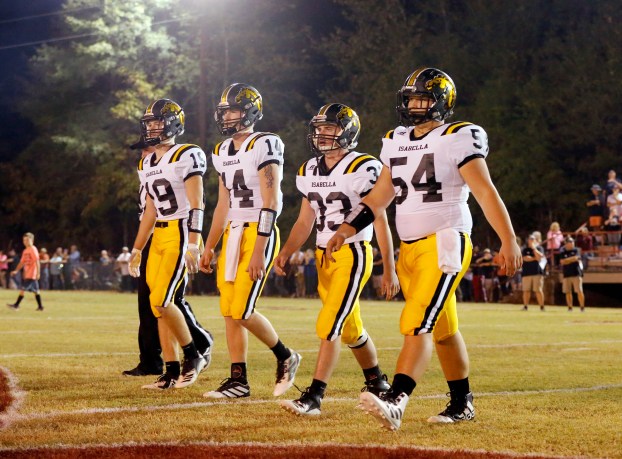 Branden Evans (No. 54) and Cole Atchison (No. 14) were teammates at Isabella last year and now will be teammates in college at Culver-Stockton in Missouri. (Photo by Brandon Sumrall/Special)

Branden Evans and Cole Atchison have been the best of friends since seventh grade and that bond will now carry on at the college level, as they have both signed to play football at Culver-Stockton College in Missouri this fall.

Evans recently announced his decision to attend the school, which came a couple of months after Atchison made his choice.

Prior to settling on his decision, Evans had also been looking at another interested school in Minnesota.

“It [Culver-Stockton] was a little bit closer,” Evans said. “It will be much different than the Isabella campus and a lot bigger, but I’m excited about the new challenges.”

According to Evans, he was not able to take a tour of the campus due to the pandemic, but he did his share of online research and got a glowing recommendation of the school during conversations with Atchison.

Evans and Atchison are hoping to room with each other when they get to college, something they are also hoping helps the transition to a new situation and a new state.

Evans was the starting center for the Mustangs in recent years and will enter his first college camp vying for a spot on the Culver-Stockton roster as a center.

However, Evans is also keeping an open mind and at the end of the day wants the opportunity to play college ball even if that means moving to another position.

He played some guard growing up, but has primarily been a center since seventh grade other than some snaps at tackle during his senior season.

“I’m open to anything,” Evans said.

Each offensive snap starts with the ball in the center’s hands prior to it being snapped and the play getting under way.

“I’m first off the ball most of the time, so I can see what’s going to happen,” Evans said. “I like the leadership role required to play center.”

However, Evans continues to remind himself that the art of playing center is all about performing two duties consistently well.

“Getting the ball to the quarterback and getting off the ball as fast as you can,” Evans said.

Although Evans realizes that he is often classified as undersized, he has learned how to have success and not let his height be a negative factor.

Evans thanked head coach Tate Leonard for helping give him the tools to succeed as his offensive line coach, as well as Atchison’s father for being the one that called the Culver-Stockton coaching staff and informed them about him.