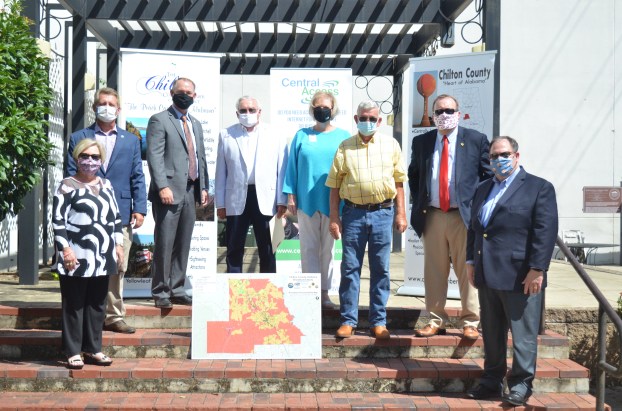 Members of the Chilton County Broadband Coalition have teamed up with the goal of improving the broadband reliability throughout the county. (Photo by Anthony Richards)

Broadband in Chilton County has been lagging behind, but the winds of change appear to be rustling with a feasibility study of the area being performed by Sain Associates.

Leaders from throughout the county were on hand during a press conference at Corner Park in downtown Clanton July 27 and shared in the sentiment that broadband reliability has been an issue for years, and actions are being taken to make sure a positive change finally occurs.

“In Chilton County, more than 75% of its citizens are underserved or unserved with broadband internet,” Meads said.

Community leaders in the fields of business, education and health, as well as the local municipal leaders are part of the Chilton County Broadband Coalition.

“Building a coalition to address the needs for a strong and reliable fiber network is a tremendous step for Chilton County,” said Whitney Barlow, Chilton County Industrial Development Authority executive director. “Our coalition will address not only the needs of our current residents, but allow for our county to become more competitive in the digital age.”

The feasibility study is a biproduct of the coronavirus pandemic and the difficulty the situation presented so many people in the county when it came to working or educating their children from homes.

Parnell shared a personal example of when he moved his business to a new location a mile away from its former location inside Maplesville’s town limits only to find out that he had no internet once he moved his staff into the new building. As a result, Parnell had to use hot spots to operate the office for two years at excess of $1,000 a month until another solution could be found.

“In 2020, that’s not acceptable,” Parnell said. “We’ve got to do better than that. Unfortunately for us, we are compared to our neighbors who are just north (Shelby County) and just south (Autauga County) of us. They have a lot of higher population thresholds than we have, and it makes it a lot better of a business venture for internet providers to go to those areas first.” 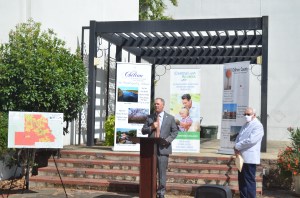 Chilton County Commission Chairman Joseph Parnell gave examples of how deficient the county’s broadband has been and how the time is now to do something about it. (Photo by Anthony Richards)

According to Parnell, all the municipalities teamed up to chip in financially to fund the study coalition, because it makes the entity as a whole stronger both in reality and in perception.

“What we’re trying to do is do some of the leg work for them (internet providers) to show them the market that we have and how badly it (high-speed internet) is needed here.”

One of the primary goals of the recent and continued efforts is to entice an additional provider to enter the territory or to get some of the providers already in place motivated to help meet the current needs.

“It affects everyone that I know in this county,” Parnell said. “This is the new infrastructure for the county. We were once able to get power to the rural areas in this state, and I think it’s time that we collectively get internet to not only the rural areas, but even the non-rural areas.”

Central Access is a broadband company, while Central Alabama Electric Co-op is an electric company.

“Our vision and goal is to provide reliable, high-speed and affordable broadband to all of our members and businesses in the community,” Connie Bainbridge with CAEC said.

Bainbridge spoke on behalf of CAEC President and CEO Tom Stackhouse at the press conference.

According to Bainbridge, Stackhouse’s vision by the end of the process is that every road have affordable internet.

“That is what’s going to make us competitive in this national and global world and economy that we all work and live in,” Bainbridge said. “We stand ready to partner with you.”

The first step for Central Access is to connect their substations and offices. Central Access currently has roughly 1,000 members and construction continues.

Central Access is still determining its service route for the future.

“Right now we’re focusing on a core line,” Bainbridge said. “One of the reasons we can’t tell you right this minute where we’re going is because we have so many opportunities.”

These opportunities include pending grants that Central Access is waiting to hear a decision on around October.

Those grants could help dictate which direction the company chooses to head moving forward.

According to Chilton County Schools Superintendent Jason Griffin, the school system is currently in the process of providing devices to achieve online access for all seventh to 12th graders in the county.