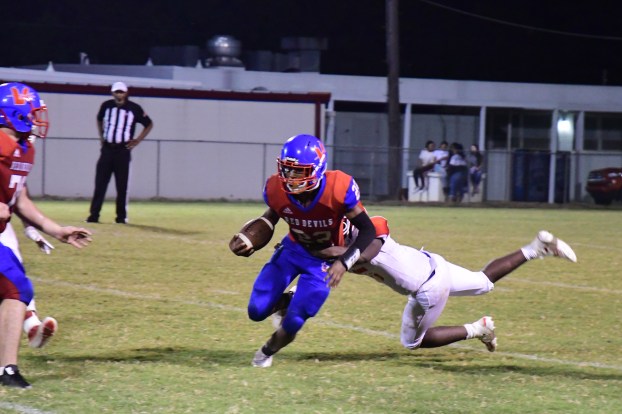 VHS shut out after late start

The Verbena Red Devils struggled to hang with region foe Loachapoka and lost 42-0 at home on Oct. 8.

It was a strange week for the Verbena players and coaching staff after the game was moved up a day because of inclement weather projections earlier in the week.

Not only did the game move up a day, but the craziness continued the day of the game with kickoff taking place more than an hour from when it was scheduled for due to the Loachapoka team buses getting caught in a massive traffic jam on Interstate 65 en route to the matchup.

After the lengthy wait, the Red Devils warmed up and eventually kicked off.

Verbena’s defense allowed Loachapoka to break off several long touchdown runs on the night, but the secondary did make plays when the ball took flight.

Christopher Guzman broke up a pass, while Cody Barber intercepted a pass on a two-point conversion attempt.

The offense moved the chains at times, usually behind the determined running of D.J. Jackson.

“I know I’ve seen the improvement within myself and my teammates,” Jackson said. “I hope everybody else out there is able to see it as well.” 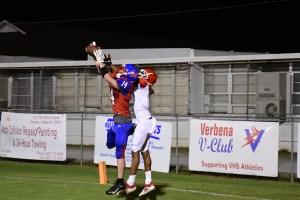 Although the improvement they have made over the past year is nice, Jackson understands that they still have a way to go, but they appear to be on the right path to future success.

“I feel like we can definitely do better,” Jackson said. “We’ve just got to get our mindset right.”

One of the attributes that makes Jackson so explosive is his ability to catch the ball out of the backfield.

His pass-catching ability is a product of him spending most of his time on the football field as a wide receiver.

“I just started (playing running back) this year,” Jackson said. “I love it, and I wish I would have been introduced to it earlier.”

According to Jackson, one of the major adjustments he has had to make is that usually as a receiver the ball is in your hands in open field, but being a running back requires the patience to find the right hole to hit at the line of scrimmage.

“It gets cramped in there at times but you’ve just got to find the yards that you can get on each carry,” Jackson said. “It’s hard, but I feel like I’m really starting to get the hang of it.”

Another aspect Jackson has shown is that he is not shy about embracing contact from defenders.

An example of this was during a nice run down the left sideline late in the second quarter. He finished off the gain by running over a Loachapoka defender on his way out of bounds.

Jackson’s pad-popping run created a chorus of oohs and aahs from the Verbena faithful as they applauded his effort.

Zion Smith started at quarterback, but Jackson also completed a pass in the game.

Nathaniel Morris and Barber each made nice catches in the game to help the Verbena passing attack.

Jared Quinn would usually get the start at quarterback, but continues to deal with lingering injuries.

Quinn came into the game on offense in the second half and carried the ball a couple of times while he was in there.

Verbena did not hold its homecoming festivities as had been originally planned due to moving the game up a day. Homecoming will now be Oct. 30.