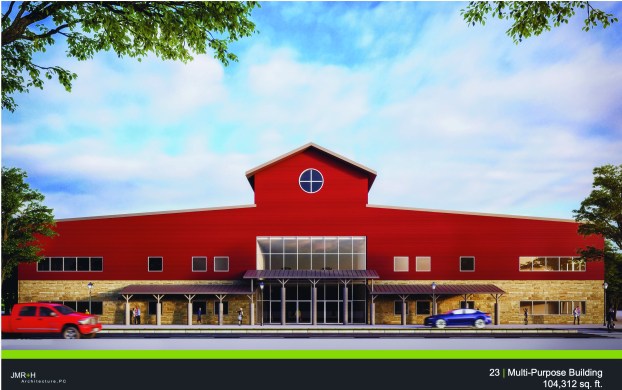 The Alabama Farm Center at Alfa Centennial Park is projected to be a mecca for tourism in Alabama and make the city of Clanton not only at the geographical center of the state but also a new revenue center.

As a tourist attraction, the Farm Center will emphasize the state’s agricultural roots.

Construction of the 500-acre project was expected to begin in the spring of 2021, but the COVID-19 pandemic caused a delay. Until environmental studies are completed, no work can be done to the site, which means there is no firm date for completion of the project at the moment.

The Farm Center will be the first development in the park, which will be on the east side of Interstate 65 at Exit 212 between Alabama Highway 145 and County Road 43, within the Clanton city limits. The land is currently undeveloped.

Clanton was chosen from 12 sites throughout the state that were in contention.

The city of Clanton created a partnership with Chilton County and Alfa to help provide funding for the project, which was initially announced in February 2019.

The city will see the most direct impact and has created a master plan to help capitalize on the growth expected at Exit 212.

According to Chilton County Commissioner Joseph Parnell, brother of Jimmy Parnell, an estimated $15 million of additional tax revenue is expected by the county per year once the Farm Center is up and running and the area around it begins to grow.

“As the private sector grows, the less the local governments will have to put into it,” said Whitney Barlow, executive director of the Chilton County Industrial Development Authority. “The payoff is going to be worth it in the end.”

According to Barlow, the amount of money to be invested by the city of Clanton and Chilton County has not been finalized.

The project was proposed by Alfa and the Alabama Farmers Federation as a celebration of the federation’s 100th anniversary in 2021.

Once it is built, the multi-purpose facility is expected to have a far-reaching economic impact.

According to a 2019 economic impact study performed by the University of Alabama, the project will cost $125 million to construct and will employ an estimated 50 full-time and 100 part-time workers annually.

Through a variety of agricultural shows and exhibitions, 932,000 visitors are expected to enter the facility in a given year.

The study projected the Farm Center’s visitors will generate $156.3 million in economic activity or output for Alabama each year.

The study also found that a direct injection of the center’s construction funds into the state economy is expected to create $290 million in business-to-business sales.

“We think that over half of the visitors that come to the park will be from out of state,” said Matthew Durdin, director of external affairs with Alabama Farmers Federation. “That is a win-win for everyone across the state, and we’re excited about that.”

According to Durdin, the goal of the complex is to offer an educational and enjoyable experience that helps families and children rediscover the importance of agriculture.

“When you attract younger people and get them to come through the gates, that is where you can really start to see the difference,” Durdin said.

The plan includes agriculture-based exhibits that could be used for school field trips.

Durdin said he has a book of contacts from organizations that have reached out to him with questions about the center and hopes of booking events.

Danette Haynes, vice president of the Tuscaloosa Kennel Club, is one who had called Alfa to express interest in using the site as host for the club’s annual dog show, for which it partners with the Birmingham Kennel Club.

The dog show is held in April but was canceled this year due to the pandemic.

Haynes dreams of having the dog show as a fixture on the facility’s calendar.

According to Haynes, hundreds of participants from across the country come to the annual show, with dogs of various sizes and breeds taking part in an array of classes.

“It is a large-scale event indeed,” Haynes said.

The Farm Center will have the versatility to attract a wide range of events, some of which, such as recreational vehicle rallies, do not have anything to do with agriculture or animals.

“This center will stand out versus any other event venue in the state,” Durdin said. “It’s going to be big in more ways than one.”