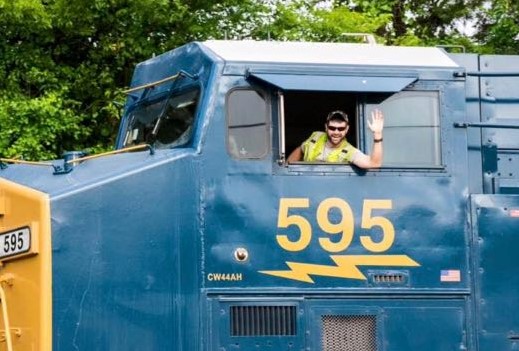 Jacob Oaks is a conductor for CSX.

Whether the audience was hoping to be transported to another place or inspired by the influx of new industry and new possibility, trains have been an object of fascination in the United States since 1827 when they were first introduced. The Louisville and Nashville Line (commonly referred to as the L&N line) was born in 1850 and ran between the two cities. It serviced both governments during the Civil War. Although the railroad suffered considerable damage, by the end of the war, L&N began expanding. Thirty years after the Civil War ended, the line had grown to St. Louis in Missouri, Cincinnati in Ohio, to Birmingham and Mobile in Alabama, Pensacola in Florida, and New Orleans in Louisiana. Railroad tracks were set across the state. Small towns became connected, introducing more resources to the community, providing opportunity and travel was made easier. During this historic revolution, local Chilton residents John William Oaks and his wife Mary Ann were witness to the railroad making its way into the county. John joined the L&N line and began his career working with trains. Five generations later, the Oaks family continues the tradition of “working on the railroad.” Jacob Oaks of Thorsby, the great-great-grandson of John Oaks is a conductor for CSX, the same company that was once referred to as L&N.

Jacob has a collection of train and family memorabilia and history. One item recounts a train accident involving his great-great-grandfather and the crippling injuries he received. After the accident, John Oaks received money from L&N and purchased a farm located “two miles north of Lomax and one-half mile west of the L&N Railroad” in 1914.

Many of the men in the Oaks family have worked for the railroad, including Jacob’s father, Steve, who worked for 40 years in the Service Engineering Department and Jacob’s younger brother, Wesley. However, Jacob also shares the same train background on his mother’s side of the family. His maternal grandfather, Pete Ellison, (now deceased), retired after 42 years of service as a passenger and freight conductor; his uncle, Eric Ellison of Isabella, works as a conductor and his cousin Hunter Ellison, also of Isabella works as a conductor.

The family has witnessed the history and evolution of trains throughout the years. Technology has made advances on trains and how they function. At the beginning of Pete Ellison’s career, during the early 1950’s, trains were still steam powered and were slowly being updated to gas and diesel. Steam engines burned coal to produce hot steam in the water tank in order to make the train move. Today, diesel-electric motors power electricity that runs electric traction motors on each axel. Each locomotive houses 4,500- 6,000 horsepower.

“During the time my father (Pete) was a conductor, each train had five men that kept the train running: an engineer, fireman (to stoke the coal), breakman, conductor and a flagman,” said Eric. “Back then, every change on a train was made through a series of hand signals using a white handkerchief or flashlight, depending on the time of day. Men were stationed throughout the train so they could signal one another of the changes being made. Trains these days have two people: an engineer and conductor. We still use some hand signals but not as many as my father’s time. Technology has made it easier.”

Technology has also influenced the way that the train transfers signals which operates by using satellite running engines that are placed in the middle or on the rear of a train.

However, not all things have changed. Many remnants of the past and nostalgia remains.

“I go to Helena to turn my train around at night,” said Jacob. “There is a piece of rail there about 200 feet long that’s dated 1901 that we still use.”

Although Jacob and Eric have hauled a wide assortment of every imaginable product, they mainly are assigned to haul local lime, rock, paper and cardboard.

“I like to learn about the history of what used to be,” said Jacob. “Every town you know had a train station, and that’s how people traveled. There weren’t any cars. If you wanted to go somewhere, you bought a train ticket.”