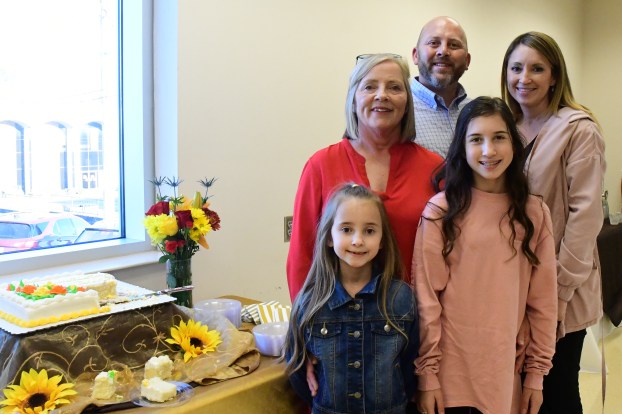 The city of Clanton honored City Clerk Debbie Orange and celebrated her retirement with a reception on Nov. 23.

“I’ve had a lot of people tell me you will know when it’s time (to retire), and it was just time,” Orange said.

She has worked in city government for “34 years and nine months,” Orange said.

In 1986, a friend had told her that the city had a position open, and Orange applied.

“If it hadn’t been for her, I would have never even checked on a job here,” Orange said. “I owe her a great big thank you because it’s been awesome.”

Orange said she has loved her job.

“I enjoy helping the citizens,” Orange said. “I love the employees, and they are all sweet.”

Employees pet names for her have ranged from Mama to Miss D.

She said the occasional difficult customer was the only challenge.

“There’s nothing really that I didn’t enjoy about it,” Orange said.

Orange said she has no special plans for retirement but will be spending more time with her family.

“I just want to enjoy it, not have as much stress,” Orange said of retirement.

She plans to stay in Chilton County as it has been home her entire adult life.

Orange was presented a plaque of appreciation during the voting session of the Clanton City Council on Nov. 23.

Councilman Billy Singleton expressed the city’s gratitude for many years of service before the Council voted to officially accept her retirement.

“Debbie Orange has faithfully, professionally and with the utmost integrity served this city and its residents,” Singleton said. “Much like our former mayor, Billy Joe Driver, Debbie Orange has been the only city clerk that many residents, including myself, have ever known.”

He expressed the Council’s “sincere appreciation for a job well done” and wished her good things in retirement.