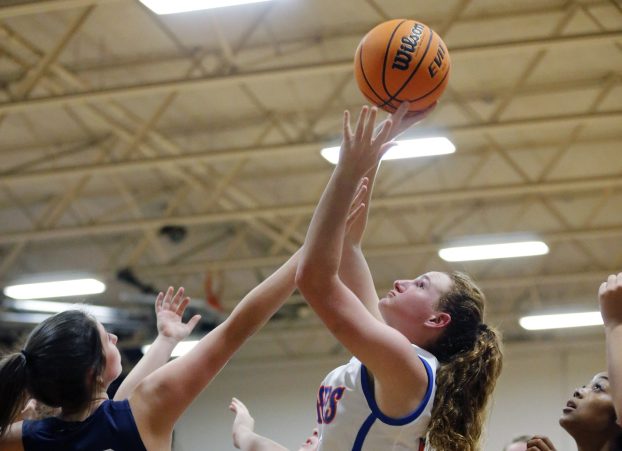 Marlie Giles of CCHS shoots in the post with a hand in her face against Jemison on Nov. 20. (Photo by Brandon Sumrall/Special)

Make it three wins in a row for the Chilton County High School girls basketball team following a 56-21 blowout victory over Jemison at home on Nov. 20.

It was all CCHS from the start of the game to the final buzzer, as the Panthers struggled to keep pace offensively.

Tyeshia Williams and Iasia Anderson each knocked down big 3-pointers to help give the Tigers a 17-2 lead at the end of the first quarter.

“Once we scored that first basket off that turnover, we just started having fun the rest of the game,” CCHS center Marlie Giles said. “There wasn’t really a lot of pressure on anyone particular. I feel like we got everyone involved, and they did their part.”

Much of the offensive success was due to excellent defense by CCHS and forcing Jemison into turnovers.

Kelsey Cleckler was one of the players who demonstrated a knack for disrupting passing lanes with her active hands on the defensive end. 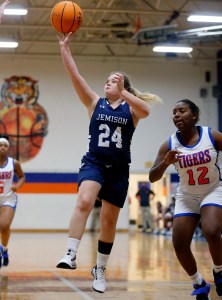 On one of those occasions in the second half, she hustled down the court after a turnover and was on the receiving end of a beautiful assist from Anderson that led to a layup by Cleckler.

“We play every game like it is our last, because we don’t know when the last one might be with everything happening this year,” CCHS guard Saniya Underwood said. “Our one mission is to play together.”

Anderson led the Tigers with 19 points, while Gabby Harris and Williams joined her in double figures scoring with 12 and 10 points respectively.

Giles had been averaging a double-double in the early part of the season, and although she fell short of that mark against Jemison, she was still very active on the boards and added seven points.

“This year, I’ve really worked on managing my rebounds,” Giles said. “I just try my best to do my part playing down low.”

Ashlee Hilyer led the Panthers with eight points, including a pair of three-pointers. Haileigh Greer scored seven points and showed a knack for getting to the free-throw line.