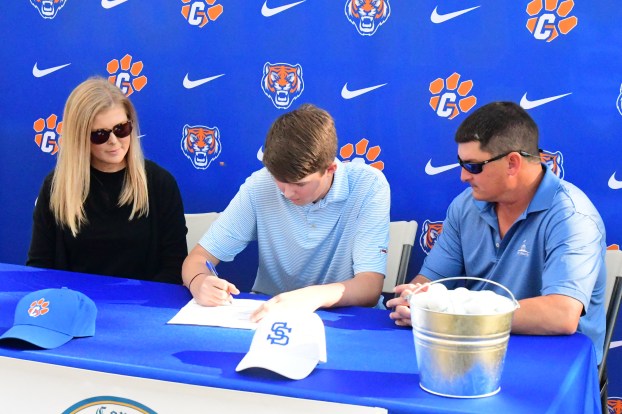 Playing golf is a family tradition for the Watleys, and Carson Watley was the latest to sign to play at the college level.

Watley signed to play golf at Snead State Community College in Boaz, which is also where his brother Turner played, on Nov. 20.

He picked up the game in third grade, but did not really start playing consistently until sixth grade.

By his eighth-grade year, he had moved up to the varsity team.

He grew up playing at Clanton Country Club, which made it fitting that he held his signing ceremony at the club.

Those at the club fondly call him “Fabio.”

“I always thought about playing college golf, but it was probably 10th-grade year when I realized that I was doing alright,” Watley said. “This past summer I really started throwing up some good scores and got a lot more offers.” 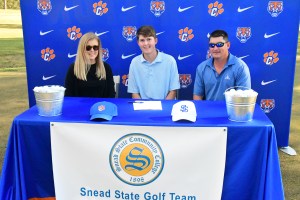 Watley held his college signing at the Clanton Country Club, where he learned to play golf growing up. His nickname at the club is “Fabio.” (Photo by Anthony Richards)

Putting and chipping are the two aspects of his game that he has seen the most growth in recent years.

“Chipping is what we’ve always worked on,” Watley said.

He is not the longest driver off the tee, but he strives for consistency and hitting the fairways at a decent rate.

“I’m not one of those that tries to grip it and rip it,” Watley said. “I’m just trying to keep it in the fairway. That’s how I’ve always been taught to play. It’s all about controlling the power.”

Watley’s passion for golf stands out.

“I tried playing basketball in 9th grade, but I couldn’t do it,” Watley chuckled. “I would be wanting to go hit golf balls, but I had basketball practice.”

On average, he hits balls about three days a week and then plays a round on the weekend.

He would practice even more, but he also has a job, which requires a certain amount of time in his schedule.

Watley has high hopes of one day having a shot at being a professional golfer.

But first, he is looking forward to seeing the increased competition and intensity level of the college game.

“I like playing against kids who are better than me,” Watley said. “Growing up with an older brother, I got my but kicked a lot on the golf course. I think I’m ready for the challenge.”