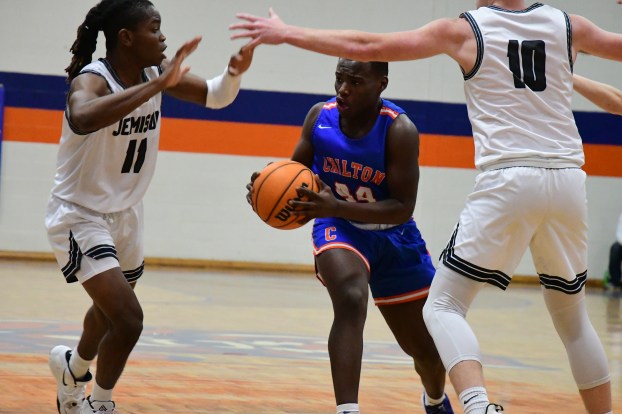 Jamon Dejarnett of CCHS looks for an opening between Jemison defenders in the semifinal matchup on Jan. 8. (Photo by Anthony Richards)

The Chilton County boys basketball team had fun and it showed during an 88-61 victory over Jemison in the county semifinals on Jan. 8.

It was a welcome sight for CCHS head coach Austin Moncus, especially after the Tigers have gone through some struggling times.

“The kids resiliency and them wanting to get better at practice is going to get us to where we need to be,” Moncus said. “We’re a very young team, and it’s going to take a team effort for this team to be good. I’m glad we did that tonight.”

Four different players finished with double-digit scoring for the Tigers on the night.

The majority of those points came not just from pinpoint shooting, but direct results of excellent ball movement in the half-court offense.

“I’ve been preaching to them to take one extra pass and do the little things right, like boxing out,” Moncus said. “It’s about just playing the game the right way and showing it the respect it deserves.” 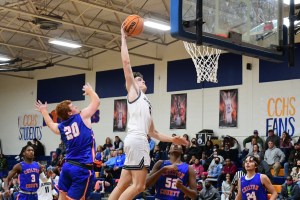 Jemison’s Nathan Johns takes flight on his way to a dunk. He led all scorers with 23 points. (Photo by Anthony Richards)

The balanced CCHS attack was led by Jakeveon Bolding, who scored 16 points, while Jakobe Worthy had 15 points, Jamon Dejarnett finished with 13 points and Jake McKinnon added 11.

Nathan Johns and Harrison Hilyer were the primary offensive production for Jemison and combined for 45 of the Panthers’ 61 points. Johns finished with 23, while Hilyer posted 22.

The combo kept Jemison in the game as long as they could, but the CCHS depth eventually wore down the Panthers in the final quarter.

The Tigers will play Thorsby in the county championship Jan. 9 at 5 p.m. at the CCHS gym, where they will look to stop the Rebels from winning a third-straight county title.

“Thorsby is a good team and they are very fundamentally sound, and we’ve struggled against teams like that in the past,” Moncus said. “Tonight, was a very good starting point to get things headed in the right direction, and I’d like to see that carry over.” 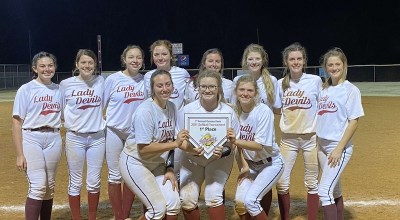 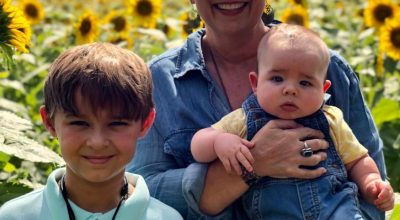 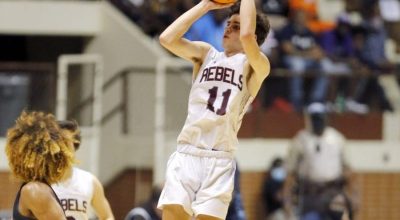