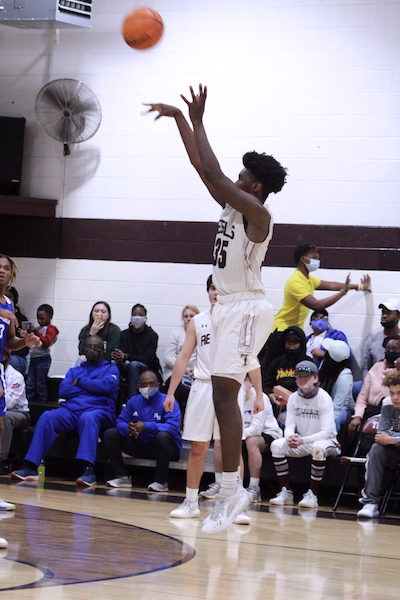 Often in sports is it that people get to watch history be made. Every year, heroes come to the surface to deliver incredible performances that shatter the history books in a given sport.

For high school basketball at Thorsby High School however, that never seemed to be the case. Until the night of Feb. 19, 2021.

That Friday night, the history books were changed as Thorsby defeated Orange Beach High School 50-47 to send the team to its first ever Elite 8 appearance in school history. The star of the night, junior Brody Mims, sunk nine buckets and added a free throw for a total of 26 points. He also added six rebounds, a steal and two blocked shots.

“Offensively right now Brody Mims, he’s a junior, he transferred so this is his first year, and … he’s come on, big time,” said Thorsby head coach Russell Ricks in an interview. “I mean he scored 26 of our 50 points, Friday night. I think he had 16 Wednesday night. But I mean, he’s probably our biggest scoring threat.”

Mims was not the only contributor in the Rebels’ historic win. Senior Sawyer Sellers was the teams second-leading scorer, adding seven points of his own while also leading the team in rebounds with nine and blocked shots with eight. Senior Xzavier Leverett also contributed, adding six points, six rebounds and two steals.

There were other contributions made in the team’s historic win. And getting to this point has been a collective team effort.

While getting to the Elite 8 has been an incredible accomplishment for Thorsby, they are by no means satisfied. They want more, but ahead of them will be their greatest challenge yet.

“Now, we got a tall task Friday,” Ricks said. “They [Calhoun] got a five-star McDonald’s All-American point guard on their team that’s already signed with Alabama. Which everybody in the country wanted him. They’ve got a few other players to go with him.”

“I mean he’s a highlight reel, dunking machine of the league,” Ricks said. “We don’t need that to happen.

The game plan for Thorsby will be to keep Davidson at bay with consistent defensive play, something that has been more common for the Rebels in the second half of the season after the team switched from a three-out, two-in defensive set to a four-out, one-in defensive set.

Something else Thorsby will really have to focus on is not giving the ball away. Turnovers have been a problem for the Rebels as of late. Although they’ve been able to prevail in this regional tournament despite the turnovers, they may not be so lucky against Davidson and the Tigers.

Should they play a clean defensive game and limit the turnovers, there’s a good chance that Thorsby can come out with a victory over the state’s number one player.

If they pull that off, the history books will once again need some re-writing.