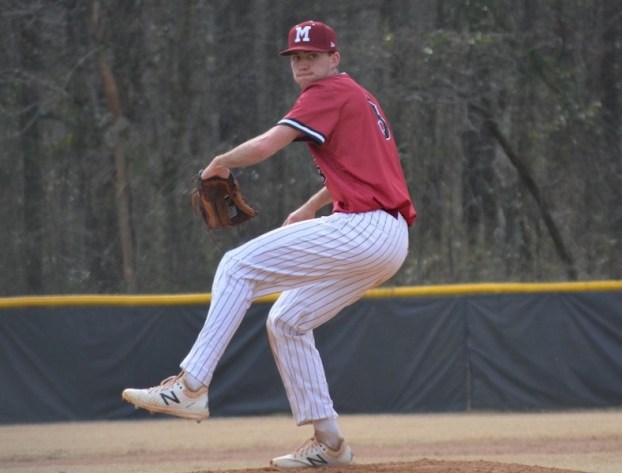 Jackson Abbott threw a perfect game in Maplesville’s 14-0 win over Billingsley High School. He struck out 11 of the 15 batters he faced in five innings of play in the win. (JUSTIN LITTLE/ CONTRIBUTED)

Through four innings of play, Maplesville pitcher Jackson Abbott had been sensational, facing 12 batters, none of which reached base. He was just three outs away from a perfect game.

Abbott took the mound calm and collected, possibly unaware of what he could accomplish. Everyone else on the team, however, was fully aware of what three straight outs would mean.

“We knew that this was it, we just had to get three outs in the fifth inning to finish it out,” Maplesville head coach Justin Little said. “I was nervous for him [Abbott]. I don’t know if I’ve ever been that nervous for him in all my years of coaching him. I really wanted him to get that perfect game.”

Elevated heart rates from nerves for everyone on the team would not subside, but instead would stay raised from pure elation after Abbott took out three straight Billingsley hitters to finish out his perfect game, also a 14-0 win for Maplesville.

“Everybody just rushed straight to him and was congratulating him … I immediately ran to him and told him ‘Congratulations’ and that I was proud of him,” Little said. “Our catcher beat everyone up there, he caught that last strike and took off towards him.

Although Abbott has pitched no-hitters before in his high school career, according to Little, this was his first perfect game, a memory that will last a lifetime for the young pitcher.

“That’s something that I think he’ll remember for a long time,” Little said. “It couldn’t have happened to a better kid or a better human being. He’s a hard worker, he takes every game in every sport seriously, and when he takes the mound, he definitely means business.”

Abbott’s final stat line for the game was five innings pitched, giving up zero runs off zero hits and zero walks with 11 strikeouts.

Maplesville will play Vincent High School over the weekend before taking on Isabella High School three straight times to finish out the regular season.