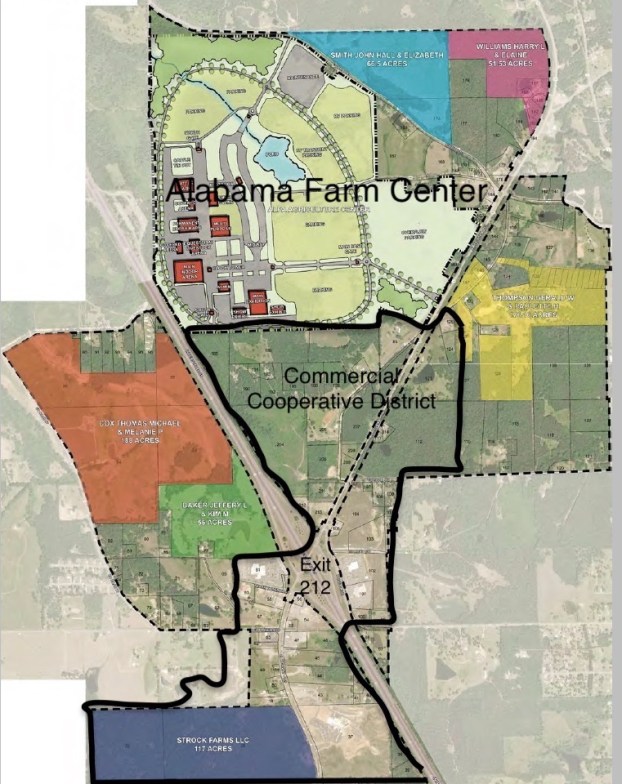 The property that the Chilton County Commission is in the process of purchasing is the Ellison property. (Map Courtesy of Chambliss King).

The Industrial Development Authority is moving forward with environmental studies on the Ellison property that the Chilton County Commission has approved purchasing with contingencies.

During the April 13 meeting, the IDA approved hiring TerraCon to complete Phase 1 environments for $3,200 and geotechnical studies for $1,500.

Executive Director Whitney Barlow said the studies will include a basic wetlands study.

One of the contingencies for purchasing the property is for a boundary survey to be completed. During the April 13 meeting, the IDA approved paying $1,100 for a survey on the property.

The property is in the Interstate 65, Exit 212 corridor and owned by Sammy Ellison.

Ellison’s property had previously been considered by the City of Clanton, but the option on the property ran out before the city closed a deal. The County Commission has said that the city is welcome to partner on the property if they would like to in the future.

The nearly 9-acre property has been described as the entrance to the future Alabama Farm Center.

Related to the Farm Center project, the IDA approved allowing the executive committee to work out a contract agreement with financial advisory company Rice Advisory. The contract would be brought back to the board for a vote before becoming official.

Rush Rice of Rice Advisory presented information and answered questions during the meeting.

Rice said having a financial advisory can help negotiate deals with bond underwriters, so the fees for a bond issuance are less. Rice also highlighted how the company had negotiated with developers on behalf of municipalities, so the government did not have to invest as much as had been initially asked had a new business or industry come to town.

During the information gathering stage, Rice Advisory charges by the hour, after that there is a flat rate covering work on the actual securing of financing.

Who will contribute what financially to the Alabama Farm Center project is still being worked out.

“We all feel pretty confident I think that we are going to wind up with some kind of bond issuance to build this exhibition hall, and we are hoping we can tackle that with a fee off of the (Alabama Agriculture and Exhibition Center Cooperative) District,” Chilton County Commission Chair Joseph Parnell said. “But, everyone that is going to come into that District is going to want something from the local government. We need someone that is going to help us discern at what point are we giving up more than we need to be giving up.”

“That is exactly what we do,” Rice said.

Financial models are created to give analysis and study projections and “what ifs.”

“There are more ifs in a project like this out here,” Rice said. “We would urge tremendous caution … because it is not one entity that you are trying to attract in here.”

Rice said he would have a sample contract and a proposal to the IDA this week.

The IDA also approved having the executive committee negotiate a contract with Conventions, Sports and Leisure International to bring back to the full board for approval at a later date

The IDA meets on the second Tuesday of every month at 8 a.m. in the River Bank and Trust upstairs conference room.