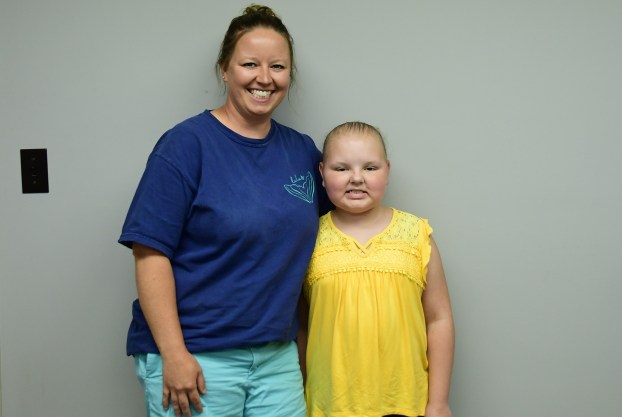 At 11 years old, Lilianna Thompson has already overcome more difficulties than some will in a lifetime.

“She had been running a fever for several days,” her mom Anna Thompson said. “It would not go away with Tylenol, Motrin, and her gums in her mouth were very red and swollen.”

She also had no appetite.

The Thompson family was on vacation. When they went to an urgent care facility, they thought it might be strep throat.

Anna Thompson felt like there was more to it, so the family came home to Chilton County, where her pediatrician diagnosed her with acute myeloid leukemia

Her white blood cell count was so high that the medical staff thought the machine may have been malfunctioning.

“They did it three times, and they sent her straight to Children’s after that,” Anna Thompson said.

She went into fight mode.

“My first thing was we were going to fix it no matter what it took,” Anna Thompson said.

Lilianna was at Children’s of Alabama receiving treatment through the end of October 2011. She was started on chemotherapy the Monday after being diagnosed on Friday.

When this did not work, the search began for a bone marrow donor. One could not be found.

A core blood transplant, from an umbilical cord donated to science after the baby was born, was used instead.

Lilianna’s body rejected the cells, so there was more chemotherapy, followed by another core blood transplant.

After the second core blood transplant, which included cells from two different donors, the results looked promising. But about a month later, it became evident that the leukemia was still in Lilianna’s body.

“They gave us no hope whatsoever,” Anna Thompson said. “They told us there wasn’t anything that they could do. They told us we needed to go on our Make-A Wish trip.”

The family went on the trip to Disney World in May 2012, when Lilianna was 3, but Anna Thompson would not take the doctor’s statement as the final word.

“I told them that day that they gave us no hope, that I was not quitting, that I was not going to give up … that if they couldn’t help here they needed to get us somewhere — anywhere in the world where someone could help,” Anna Thompson said.

At that point, the doctors began looking for other options. Additional chemotherapy was their answer, which meant she was in remission for several months before the cancer came back.

A bone marrow transplant became the only option.

A donor was finally found in December 2012 in Germany.

“It was a nine out of 10, but it didn’t matter because this was the only thing that could possibly save her,” Anna Thompson said.

“It was literally one of the best days of my life,” she said, describing when they found out there was a donor.

Prior to the transplant, Lilianna Thompson received a more intense chemotherapy and full body radiation.

“On Jan. 29, 2013, she had her bone marrow transplant,” Anna Thompson said. “It’s just like a blood transfusion … here we are eight years later, she is still in remission.”

The family has been able to contact the donor through email.

Anna Thompson said she was “over the moon” when Lilianna was finally in remission.

“I was extremely nervous after the bone marrow transplant,” Anna Thompson said.

The family stayed in Birmingham for 100 days after the transplant in a house provided by A-Team ministries.

“It is free of charge to cancer patients and their families that need somewhere to stay,” Anna Thompson said.

During that time, Lilianna Thompson was in the clinic everyday as the doctors watched for any sign of a fever or complications.

“We just prayed and trusted God that he had brought us this far for a reason,” Anna Thompson said.

Fortunately, Lilianna Thompson does not remember her battle with cancer. However, the impacts on her body from the radiation have been long lasting, leading to health complications, including dental issues, endocrine complication and an increased risk for heart and lung issues.

Lilianna Thompson returns to Children’s of Alabama twice a year. Doctors have not placed restrictions on activities she can participate in.

She is being home-schooled through Chilton Christian Academy for this school year. Her favorite subject in school is reading. When not in school, she enjoys playing with her American Girl dolls.