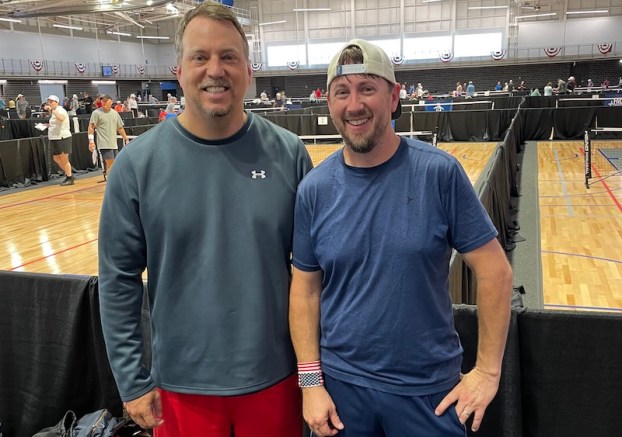 When asked what pickleball is, many people would shrug their shoulders and say they do not know.

Yet, pickleball is a rapidly growing sport, especially in Chilton County.

Described as a larger version of ping pong played on a court, pickleball is a game that has become quite popular at the YMCA of Chilton County, and two local players, Jeremy Smith and Jason Harley, recently competed in the Indoor Pickleball National Championship in Hoover.

The pickleball teammates met about a year ago when Smith started playing at the YMCA. He was getting tired of regular workouts, and wanted to do something more fun and competitive to get his exercise. He noticed Harley playing pickleball with others, and he wanted to join.

“One day I just started playing and learned the nuances and the rules, and ever since we’ve been playing,” Smith said. “We play three or four days a week.”

After about six months of playing together recreationally, Smith and Harley decided to team up to play at a more competitive level. Smith never thought that pickleball would be more than just something he did for fun at the YMCA, but soon he found himself in Hoover competing against players from all around the country.

“It was an awesome experience,” Smith said. “We’re already looking for our next competition.”

For their first championship tournament together, the two Chilton County natives performed admirably.

They were put in a bracket with 11 other teams in their age group, and after two wins and two losses they were eliminated, finishing in the middle of the pack in their bracket.

Until their next tournament though, they have returned to the YMCA to sharpen their skills and have fun against other locals.

However, there is usually a wait to play with the championship participants. With the game becoming so popular, many come to the YMCA wanting a shot at glory against two of Chilton County’s best but are sent home disappointed, as the line to play is too long.

“The only difficulty we’re having now is that we only have two courts,” Smith said. “It’s getting so popular that lots of people are showing up to play and … it’s limited in the area.”

For the competitors that want to play, the best advice one can give is to get to the YMCA early. Pickleball games are not limited to only members of the YMCA. Non-members can pay a fee to play as well.