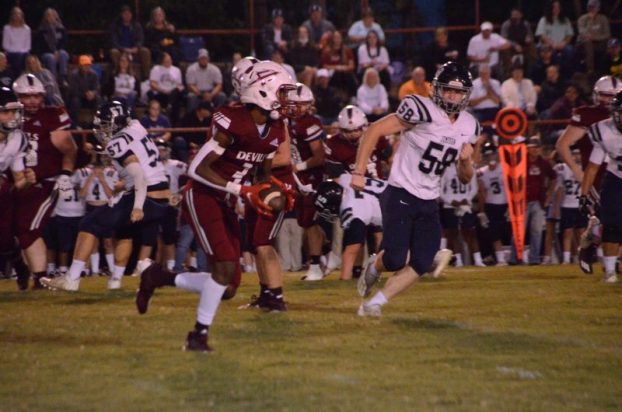 Maplesville beat Jemison by a score of 47-13 on Sept. 23. The win was the 600th in the history of Maplesville football. (ZACHARY SEIFTER/ ADVERTISER)

The Red Devils wasted no time jumping out to a lead in the game. After stopping the Panthers on their opening drive, Maplesville running back Brady Harrison put the Red Devils on the board first, scoring on a 59-yard touchdown rush.

Maplesville would never give up that lead.

Jemison hung in tough for most of the first half. On their third drive of the game, the Panthers got on the board thanks to an 18-yard touchdown pass from Hayden Robinson to Coden Cummings, making the score 14-7 in favor of the Red Devils.

They had a chance to keep things interesting as time ticked down in the second quarter.

Up 21-7, Maplesville faced a fourth and two at its own 45-yard line late in the half. The Red Devils tried to convert on a run play up the middle but the Panthers defense came up with a huge stop, giving their offense the ball with good field position.

Unfortunately for the Panthers, they could not take advantage. Instead, they were stopped on four straight plays, giving the ball back to Maplesville.

The Red Devils took advantage, going 54 yards in two plays to increase their lead to 28-7 going into halftime.

“When you play an offense like they have, you have to control the ball,” JHS head coach John Therrell said. “You have to take advantage when you do get those extra possessions, which we didn’t on the turnover on downs. We unfortunately didn’t take advantage of it and it kind of cost us. They got to rolling again.”

In the second half, Maplesville once again wasted no time getting back on the board. On the offense’s first play, Jakavion Jackson took a handoff 60 yards for a touchdown, giving the Red Devils a 34-7 lead.

Harrison scored once more to bring the score to 40-7, and from there, Maplesville just started running the clock.

“Overall, we’re happy with the whole team’s performance tonight,” Maplesville head coach Brad Abbott said. “Especially midway through the season, you want to be pretty solid in all three phases. I think we showed we were pretty good in all three tonight.”

The win kept Maplesville’s perfect season intact. The Red Devils improved to 6-0 with the victory. Jemison, meanwhile, fell to 0-5 on the season with the loss.

Maplesville will go on its bye week next week before a big showdown against Notasulga on Oct. 8. Jemison will head to Selma next week for a regional match. 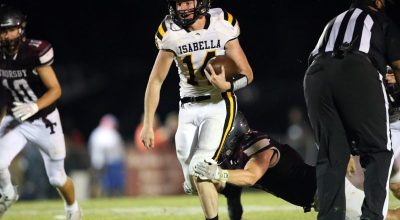